Ready For a Walk ?

No Doubt about it, spring is in the air.

If warmer days and fragrant blooms aren’t enough of a sign, other sights, such as a Robin gathering garden chafe to weave her nest or a bee buzzing around the blossoms, are living proof.

For more delightful clues, why not join me on this three part tour of May in our own gardens, Natures garden and in a special NS Public Garden.

Part One – In our gardens: 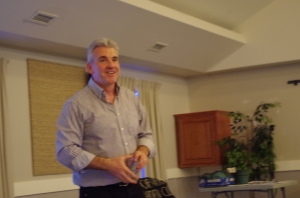 At the Monday, April 18 th regular meeting of Chester Garden Club members and Guests paid close attention as Dave Adams, Bee keeper and educator talked to us about the decline of the Honey Bee. His presentation included a detailed history of honey bees in the world and how this has changed over the centuries. Dave suggested several ways we can make a difference in our own gardens to improve the life of honey bee.

Please check out the following links for more information:

Life in a Honey Bee Colony

Beyond the Veil: The Feeding of Bees

Beyond The Veil: The Uninvited Guest

Beyond the Veil: Harvesting Honey

Like bees to honey, Chester gardeners were drawn to a recent Garden Club talk to learn about the honey bees themselves. Dave Adams, a certified beekeeper and a member of the Chester Garden Club, gave a very entertaining and informative presentation about life in a bee colony. 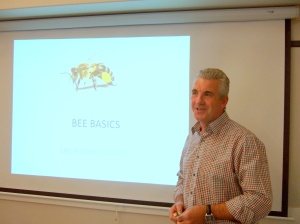 During the warm months, a typical colony contains about 50,000 bees, each with its specific role to play in supporting the group, so that the whole colony acts as a single body, an organizational structure which is described as a “super organism”.

Worker bees make up about 98% of the colony’s population; these female bees do all the work in the hive (cleaning the hive, building the combs, feeding the young, foraging for nectar and pollen, and defending the colony). The queen is also female but her sole role is to mate, produce eggs, and thus ensure the colony’s future population. The rest of the bees are the male drones whose only role is to try to mate with the queen on her single mating flight.

Dave brought along a typical “hive” used in Nova Scotia and he passed around a sample screen on which bees had built honeycombed cells. His excellent photos provided clear illustrations for his talk, and helped him explain the botany of the flowers and the physiology of the bees, both of which are integral to the process by which bees make and store honey. Dave pointed out that the younger worker bees, after emerging from the larval stage, spend about the first 20 days of their lives working inside the hive. Later, as they mature, they graduate to the jobs of foraging and bringing back food for the colony. His description of the Queen’s finesse in laying the eggs destined to become either worker, drone, or possibly a future queen, was a highlight of his talk. The following photos are a small sample of the many photos that enriched his talk.

Dave concluded his presentation with a reminder of the importance of bees as pollinators for our food crops and thus their importance to Nova Scotia’s economy (especially the blueberry crop). He noted that worker bees are perhaps the only animals willing to  give up their right to bear young , and even their lives, for the good of the community.  Having realized that fact,  it doesn’t seem much of a sacrifice for gardeners to focus on planting the particular types of flowers that will feed the bees and thus encourage them to continue pollinating our crops.