While continuing our tradition of showcasing local floral displays as captured on film on the 15th of each month, we’ve had to adapt the convention slightly to allow for Chester’s seasonal climate changes. During those months in which we have no actual plants blooming outdoors, we feature either indoor plants or the appealing characteristics of foliage, bark or structure of those hardy plants that endure a cold Canadian winter. 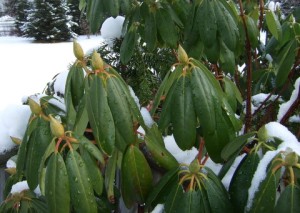 Today’s blog contrasts the ways in which plants deal with winter’s blasts. The healthy buds of the rhodo-dendron (Chelsea peach)  are primed for their opening day several months from now, while the leathery leaves are beginning to expand slightly after having contracted during a cold snap days earlier. The shrivelled brown leaves in the next close-up are those of a beech tree (Fagus grandifolia), a species native to the Acadian forest.

These trees retain their leaves all through the winter, thus adding form and texture to the snowy landscape. The image below shows a different beech (Fagus sylvatica purpurea) as seen from a distance.

The Acadian Forest Region includes the maritime provinces and most of the New England states. Closely related to the Great Lakes-St. Lawrence and Boreal regions, it is a transition forest that contains a diverse collection of trees, shrubs and other plants. According to Natural Resources Canada’s classification of forests, Chester falls into the Atlantic Maritime ecozone, which has elements of both deciduous and boreal forests. On the coast of Nova Scotia, the forest has a more boreal-like appearance with formations dominated by fir, white spruce and black spruce but with a number of deciduous species such as red oak, American beech, black ash, red maple and white birch occurring in sheltered areas.
The maritime ecozone is also home to a number of berry-producing plants. In the Chester area, birds and larger animals have already harvested many of the berries on shrubs and trees. Here, a small lone clump of wild holly berries is seen against a background of still waters in a cove.