Responding to a note in the last blog about not having any images of pruners at work, Sandy Dumaresq sent along this photographic gem. Three hardy souls are observed as they perform serious surgery on a lovely mature magnolia that had been moved to the Club’s own Cove Garden back in December 2006. The pruning was the first step in a rehabilitation process that, sadly, did not produce the hoped-for results.

Faithful readers will remember the unfortunate saga, the experiment in optimism in which the tree was rescued from certain doom under a developer’s backhoe, and was then transported from its home base to the new spot in the faint hope that it might survive in its new location. (see the blog dated April 11, 2007, in the “View entire blog” menu.) Despite heaps of water, fertilizer and professional advice, the tree did not survive and had to be removed in 2009.

After several weeks of warm sunny weather, gardens and woodlands in the Chester area were becoming very dry, and the water levels in many wells and in fish ponds were down significantly, so the last two rainy days have been very welcome. Spring seems to have sprung a little early in our area so perhaps it’s time to review the chores that arrive with this new season.

Most experienced gardeners will have their own lists but, as a reminder for both seasoned and novice gardeners, the Nature Conservancy has put out a list of 10 ways to get your garden ready for spring. Leading the list is the need to “clear away and compost the dead stalks of perennials that provided seeds and cover for birds and other wildlife over the winter but that may harbour unwanted diseases and bugs.” Of course it’s a moot point as to whether there are any “wanted” diseases, but the task is certainly an important part of preparation for the gardening season. 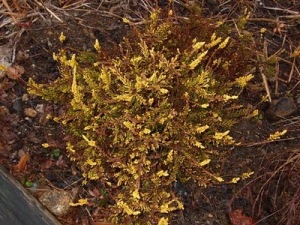 A second recommendation is that this is a good time to “prune shrubs and small trees to maintain form and vigour.” From experience, most gardeners will agree that it’s easier to see the form of the plant before it is sheathed in leaves and blossoms. Hints on techniques of pruning can be found in many gardening books. (Although the images in this blog happen to show spring-blooming heaths and heathers, that’s only because I don’t seem to have a photo of a pruner in action. )

Number 4 in the Nature Conservancy’s list is to “start turning over your compost pile.” This is an excellent suggestion except that the compost pile in your blogger’s yard is still frozen solid. Perhaps this item could be moved farther down the list. For the complete list, and lots of other excellent information related to nurturing nature, check out the organization’s website: http://www.natureconservancy.ca/

Colourful tulips are heralded by many as one of the first signs of spring. Gardeners in rural areas, however, are often discouraged from planting tulips because their gardens are raided by deer. Instead, the rural gardener seeks the early signs of spring in other gifts of nature. The appearance of the first, small, ruby knobs of rhubarb, for example, are a pleasant source of encouragement and a signal that the garden renewal has begun. 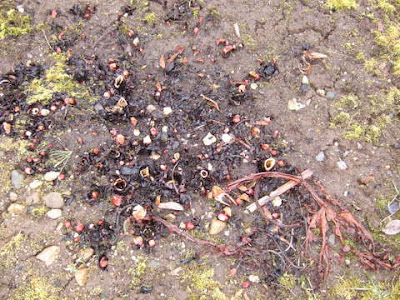 The above photo might almost be mistaken for a slide showing a cross-section of tissue in a biology lab, or a desert landscape, but it really is the first sign of rhubarb emerging after a long winter sleep.

Although these crocuses were already in bloom on Bloom Day (March 15th) in Chester, the photo wasn’t available at the time. The lovely blooms are so profuse, however, that they deserve a showing, whatever the date.

It appears that Bloom Day itself is a foggy concept to some some gardeners in the Chester area. To clear up any confusion on the part of anyone reading this blog, an explanation may be in order. Garden Bloggers Bloom Day was initiated in the USA in 2009, with the aim of showcasing the wide variety of plants growing in different climates and regions at the same time. Anyone can join by posting their photos of garden blooms on their own blog, and registering the name and the url of their own site at “maydreamsgardens.com” , a blog which is maintained by a keen gardener in Indiana.

Your blogger came across the concept when reviewing a number of gardening blogs during the winter and, in fact, reported on the project in January of this year. (see the side-bar for a list of all our previous blogs). To view the submissions for the most recent Bloom Day, go to maydreamsgardens.com and scroll down through Carol’s description of her own March Bloom Day (in text and photos) until you find the long list of sites (153 at last count) that have joined the project. We hope to have more photos submitted to our site for the next Bloom Day (April 15th), and perhaps we will be able to add Chester Garden Club’s url to the list.

Meanwhile, as a postscript to the Club’s last meeting, we are pleased to post the next two photos: one of speaker John Pece in conversation with Jane Wilkins, who introduced him to the meeting, and another as he sat with Sheila Knowlton-MacRury, the club’s president. John’s presentation was a wide-ranging survey of the principles of sustainable building and the physics of trapping solar heat in a greenhouse. He is currently living and working on Nova Scotia’s South Shore and can be reached at whitedogdesignbuild@yahoo.com.

And, below, another shot of crocus blooms in a Chester garden. Following a particularly heavy rain and wind storm at the end of February, March has provided an unusually warm and dry introduction to Spring in our area, to date. 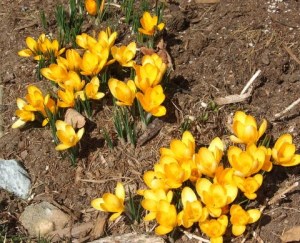 Despite the recent spate of Spring-like weather, Chester cannot boast of many outdoor blooms for Bloom Day North on March 15th. Rising to the challenge, however, Sandy Dumaresq has sent photos of blooms taken in her garden to mark the day. In the photo below, a small but healthy Hamamelis Jelena A shows its spidery blossoms to good effect.

An attractive group of heathers (Caluna Vulgaris “Blazeaway” and others) brighten the landscape that is now devoid of snow.

Because our climate precludes a wealth of plants in bloom outdoors in March, many Chester gardeners resort to a natural alternative. They bring branches of spring-flowering shrubs indoors, and force the plants to bloom inside, in advance of the season.

Forsythia is a particularly good choice for such an exercise. The profusion of delicate yellow flowers on gracefully arching branches creates a sort of chinoiserie effect that adds a delightful Spring-like air to any room.

According to a recent item in the newsletter on the blog “Dave’s Garden“, the plant is named for William Forsyth. Dave’s newsletter tells us: “Forsyth was a true gardener, rising to curator of the Apothecaries’ Garden (now known as the Chelsea Physic Garden) in the late 1700s where he innovated a rock garden, quite possibly the first of its kind. Later, he was a gardener to St. George, and within the Kensington Palace and St. James Palace, he saw to the cultivation of vegetables and fruits. Among his accomplishments were published works on the management of fruit trees. Martin Vahl named the Forsythia in his honor.”

For those who haven’t yet tried this form of “gardening”, the procedure of forcing blooms is simple. First, make a few incisions at the base of the stems (to encourage an uptake of moisture); then place the branches in a container of tepid water. Set the container in a sunny window and prepare to see a hint of green appear at the growing tips within a week (longer if the branches are cut early in the season). The yellow blossoms gradually emerge, small at first but growing larger as the days go on. Be sure to top up the water in the container as the level drops. Forcing blooms: a tried and true remedy for lifting winter-weary spirits!

Another cure for winter doldrums is to attend the Chester Garden Club’s meetings. Today, March 15, members will hear a presentation on designing and constructing Straw-bale Greenhouses. The doors open at 6:30 pm and the speaker, John Pece, will begin his talk at 7:00 pm.

The next meeting of the Chester Garden Club will take place on March 15th, at St. Stephen’s Parish Community Centre on King Street. Members who arrive at 6:30 pm will have time for a coffee and a chat with friends before the meeting begins at 7:00pm. The topic for the evening is Designing and Building Straw-bale Greenhouses.

Guest speaker John Pece will give a short overview of some of the considerations and implications of using this efficient, effective, and environmentally friendly technique to create a warmer environment and extend the district’s growing season.

John working at his own straw-bale drafting table

John’s background includes design and construction of buildings in climates as varied as those of western Canada, the mid-western USA, and Central America. Whether designing for projects large or small, his aim is to create sustainable and efficient buildings.

Judging by the huge TV ratings reported in the nation’s press, viewers of the recent Olympic Games held in Vancouver must have included all of Canada’s gardeners as well as all of its jocks!
But one of the most puzzling questions for gardeners was the story behind those green bouquets handed to the winners during the Games. What were the bouquets composed of and where did they come from? For the answers to those questions, we were referred to canadianfloristmag.com, a website that provided both a botanical and a humanitarian background.

One of the criteria used by the Olympic authorities in selecting the design of the bouquets was that the plants be native to Canada. The plants used for the bouquets in Vancouver included green hypericum berries, green spider mums, ferns and grasses. Although these plants do grow naturally in British Columbia in the summer months, they had to be imported from environmentally friendly farms in Ecuador for the February games. But the provenance of these bouquets also includes a larger and more compelling, human-interest story.

According to the website hosted by Canadian Florist, the designers who won the contest stated that ” All of the flowers and greens will be carefully hand selected and shaped into the bouquets by marginalized women, who may be recovering from addiction, leaving prison, exiting the sex trade, or who have been victims of violence, as well as by other women they train with who are changing careers to become florists. ” That program is the outgrowth of an earlier project begun by one of the designers over 20 years ago. For the 2010 Winter Olympics, 27 people were employed in producing 1800 bouquets under the direction of the designers. Such an achievement seems to call for a medal of its own.