On yet another cool day, a clutch of Chester Garden Club members gather to begin the annual spring ritual of pruning and weeding the Cove Garden. Myra has brought her handy trailer to carry away the trimmings of any plant material that can add value to her compost collection at home. 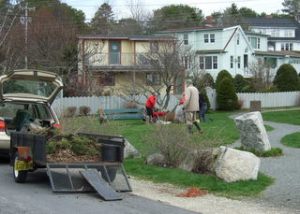 The usual consultation as to who will tackle which chores means there’s always a friendly chat before the work begins.

The morning’s work is mainly edging and weeding the rose beds that line the rock-wall border, but there is always a need to tidy up additional rose bushes and shrubs that add to the attraction of this waterfront park.

Meanwhile, at the Parade Square, the other village green-space that is maintained by the Garden Club, another team of volunteers has started a round of weeding and pruning the garden that provides a lovely setting for the cenotaph with its kilted soldier silhouetted against the sky. After debate as to the extent of pruning required, roses here are cut back to about 18 inches (about 45 centimetres in modern usage, but this group tends to fall back on the old imperial system) and red-twigged dogwoods are subjected to the same fate.

Many of the healthy stems of dogwood that have been cut back will be bundled up and taken away to be rooted in members’ gardens.

Old flower stalks, dead leaves and other winter debris are gathered up and dumped in Myra’s trailer. Sylvia’s new “shovel-shaped mitts” are useful for scooping up some of the detritus collected by the team. 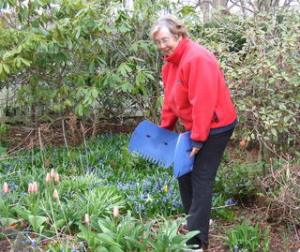 Some of the trimmed stalks are stashed temporarily in the shelter of a park bench to prevent the wind from blowing them away. 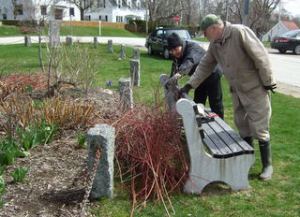 And after about two hours of healthy exercise and the satisfaction of a job well done, the volunteers put away their tools and they all head to president Heather’s home for a hearty soup and sandwich lunch. In addition to lively conversation about the news of the day, there is vigorous discussion of plans for ongoing maintenance of the two gardens. The blog will track the growth of the plants as the season progresses. 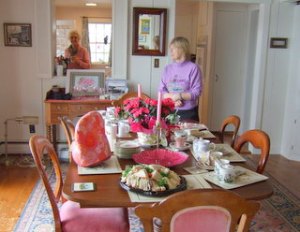